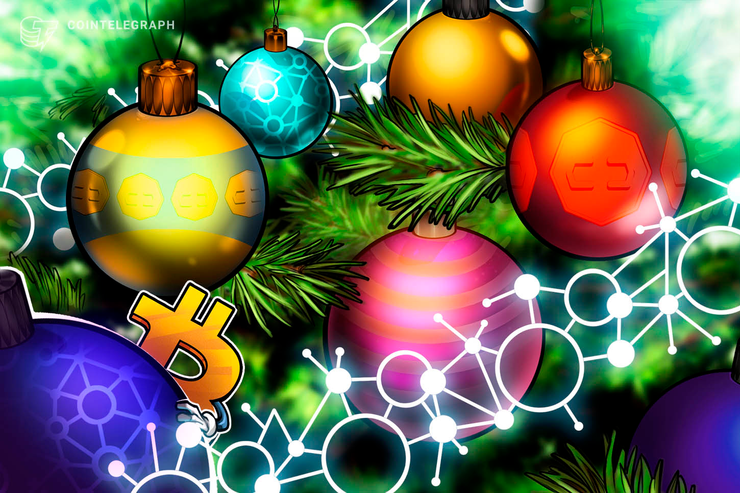 At just over 10 years old, crypto’s largest asset Bitcoin (BTC) has made a name for itself as a volatile asset, as shown by its past price action. December, in particular, has seen a notable chunk of this volatility with price moving more than 30% since 2015.

As 2019 nears its end, Bitcoin looks back on a standout year in terms — up over 100% from the yearly lows in February of around $3,350. By the end of June, BTC/USD found itself up near $13,800. Then after several months of consolidation and subsequent selling pressure, BTC hit 6-months lows of around $6.5K in November only to recover back to the $7Ks range.

Crypto space participants often look for different narratives to make sense of various price moves, as well as try to make predictions on future price action based on historical trends.

One such narrative involves speculation that Bitcoin moves significantly in December, in line with the Christmas and New Year holiday season. Historical price data indeed shows this to be the case, particularly over the past 4 years.

So is Bitcoin set for a volatile December once again? Let’s take a look at some historical data for possible clues.

Starting with data four years ago, December 2015 saw Bitcoin shoot up more than 34% in the month of December.

Bitcoin began the month with a red day, wicking down to $349 on Dec. 2. The following several days, however, hosted positive price action, leading to Bitcoin’s December 2015 high of $469, $119 higher than its Dec. 2 low.

A year later, Bitcoin saw gains of more than 35% during the same period. But unlike in 2015, however, Bitcoin held a very slight upward trend for the first half of December 2016, posting small daily candles filled with very little price activity.

Similar to 2015, Bitcoin hit its December 2016 low at the beginning of the month, dropping to a price of $743. It was not until the second half of the month that BTC ramped up its volatility,

This 2017 December ride coincided with the Chicago Mercantile Exchange (CME) and the Chicago Board Options Exchange (CBOE) both launching their respective physically-settled BTC futures trading products.

Similar to 2015, the BTC price increased for the first half of the month. After its all-time high, Bitcoin suffered a steep correction during the second half of the month, which ultimately started a bear market that would last more than a year.

Last year, price action was unlike the previous years, however. While BTC did provide over 35% in price movement over the course of December 2018, the net price stayed the same.

The asset’s price wicked up to $4,275 on Dec. 2, followed by selling pressure until the middle of the month where it tapped its ultimate bear market bottom at $3,125.

During the second half of the month, Bitcoin proceeded to rally all the way back up to $4,275 before closing out the month with downside consolidation.

Essentially, Bitcoin saw both a 35% decline and a subsequent 35% rally in the same 31 day period, leaving the market looking back on an overall volatile December.

The last four years of price data clearly show notable activity during the holiday month of December. A price move of more than 30% is significant, regardless of the asset.

The data also shows the middle of the month as significant in terms of topping or bottoming price activity, with the exception of 2016.

But while there’s no definite explanation for this seemingly seasonal volatility, Cointelegraph market analyst filbfilb says that traditional markets also often see volatility around this time — a phenomenon sometimes referred to as the “Santa Claus rally.”

“The Santa Claus Rally refers to the tendency for the stock market to rally over the last weeks of December into the New Year. Several theories exist for its existence, including increased holiday shopping, optimism fueled by the holiday spirit, or institutional investors settling their books before going on vacation.”

“While it is easy to create narratives for Bitcoin, I am of the opinion that there is no ‘seasonality’ to Bitcoin when it comes to the time of the year. Although we have seen significant upward moves before, we’ve also seen significant downside moves as well.”

Canfield did, however, point out a different concept based on big players and tax implications.

“One theory that I have heard is that professional traders and institutions take their profits going into January to hedge for their taxes for the new fiscal year,” he said. “So while this doesn’t explain we see upward price moves in Bitcoin, it may explain why we see a sell-off in January.”

Regardless of the rationale, December has hosted significant price movements each year since 2015. Will this year continue the trend?

The views and opinions expressed here are solely those of (@benjaminpirus) and do not necessarily reflect the views of Cointelegraph. Every investment and trading move involves risk. You should conduct your own research when making a decision.