BTC is superior to Gold: 83 tonnes of FAKE gold dumped on the market by Chinese Firm

BTC is superior to Gold: 83 tonnes of FAKE gold dumped on the market by Chinese Firm

A common analogy for bitcoin is that it is the gold of the internet. Like gold, it is rare and requires a significant amount of labor to produce.

For Bitcoin, there is only and will only ever be 21 million in existence. Likewise, the process of producing Bitcoin, or ‘mining’ it, is incredibly cost intensive, requiring immense sums of energy and is, arguably, incredibly wasteful.  (article link) 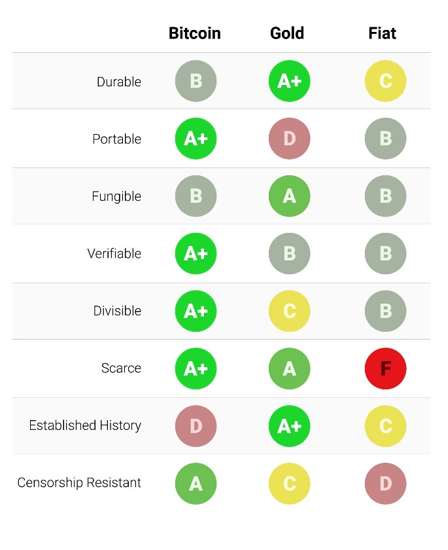 A common chart shared around the crypto scene is above. Though some of these qualifiers are hardly objective (durable? Gold is not durable. As for metals, it is pretty soft, though it ages better than cash, sure), we can see some points that gold does not win out against Bitcoin in. Mainly, verifiability, divisibility, portability and others.

But it’s the former that we will examine here. Bitcoin is verified as Bitcoin precisely because of the code. The process of mining Bitcoin is the same process as verifying transactions and the ledger detailing the location of all Bitcoin. To this day, there has never been a ‘hack’ of that ledger. There has never been a false-verification of Bitcoin, or any ‘fake’ Bitcoin (although Bitcoin SV and other copycats have certainly tried to do so).

This is one point that gold fails at. Miserably.

83 tonnes of fake gold has entered the gold market from China. This fake gold was used as collateral for loans worth over $2 billion, as decrypt reports. How that much money could be ‘loaned’ out is in itself an insane notion, and certainly speaks to the large scale operation going on here. It requires an intensive and sophisticated organization to create 83 tonnes of fake gold, let alone establish it with banks as collateral for loans. There must have been a number of inside actors across the board.

The actors, Wuhan Kingold Jewelry, founded by Jia Zhihong, has shares listed on NASDAQ. This fake gold has been priced in, used for investments, is intermingled with global capital. And this isn’t even the first time that Chinese companies have used fake gold, as decrypt also reports.

The point here being that this CANNOT happen with Bitcoin. Ever. If it could, then the entire authorship of the Bitcoin ledger is corrupt and thus, Bitcoin dies. But it hasn’t happened yet, and until we make supercomputers capable of self-consciousness and using the entire energy of the planet, it wont happen.

There’s no such thing as fool’s Bitcoin!