The total market value of cryptocurrencies has exceeded the $ 2 trillion mark for the first time in history. According to data from the Coingecko website, the value was reached this week and Bitcoin remains the main cryptocurrency, with a capitalization of more than $ 1.1 trillion, 54% of all market capitalization.

Never in the history of cryptocurrencies has value been achieved.

During the last hike, seen in late 2017, the market reached almost $ 900 million in January 2018, a value that was reached again earlier this year. 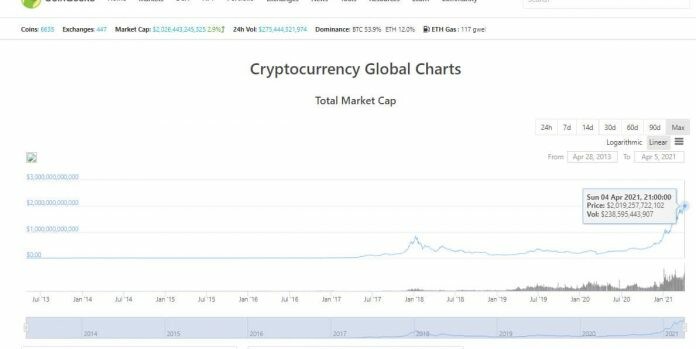 The chief technology officer at the Bitfinex brokerage commented on the matter on Twitter, he said that “the momentum and interest in the market started to expand beyond Bitcoin and Ethereum”, and added:

“As the industry continues to mature, we expect more blockchain-based applications to be introduced into the world and, coinciding with that, a surge in interest around other alternative assets … as they become more ready for the market.”

Bitcoin has struggled to surpass the $ 60,000 mark in the past few days, as it is currently trading at $ 59,000 at most cryptocurrency brokers.

As Bitcoin failed to reach a new historical record, Ethereum took the lead. Its rise in the past few days has led some other cryptocurrencies, such as Binance Coin (BNB), Polkadot (DOT) and XRP to perform well.

Ethereum is trading above $ 2,100, a record high for the world’s second largest cryptocurrency.

Bitcoin has appreciated 100% this year, while Ethereum has risen more than 190%. The two main digital currencies have massively outperformed traditional asset classes, driven by the entry of large companies and large investors into the world of cryptocurrencies.

Amid continued growth in the cryptocurrency market, more than 100 projects have achieved a market valuation of $ 1 billion.