This weekend, an attacker managed to drain $ 500,000 in ethers from the Balancer protocol. A few days after the attack, the project team announced that it would reimburse all of the victim users.

I talked telling you about this earlier this week, the Balancer protocol has been attacked! The losses are estimated at $ 500,000 in ETH tokens.

It didn’t take long for Balancer to communicate on this attack. In a tweet, the teams in charge of developing the protocol announced that they would reimburse all the users who lost their cash during the attack. 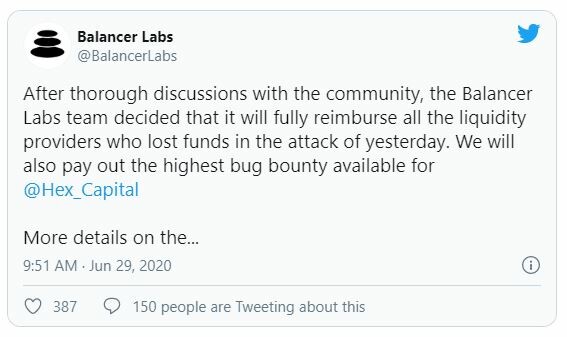 In addition to the announcement of the reimbursement, Balancer also revealed that they would allocate the maximum bug bounty bonus to Hex_Capital. The latter had highlighted the bug in May. It had been found to be “non-critical” at the time of discovery, and the Balancer had not paid the premium.

“The Agrawal bug bounty report describes in detail the attack that took place. Our team did not think it would be a practical attack, however, due to the huge sums of money and gas we thought would be needed to bring the deflationary token balance down to almost 0 in a single atomic transaction. “Said the Balancer team

Thus, all’s well that ends well for the users of Balancer who were affected by this attack. More details on the reimbursement terms will be published in the week.

Balancer Reaches $0.5B in All Time Volume in Just 4 Months

Coinbase on the edge to add more 19 promising assets.

Balancer is the Fastest-Growing DeFi Platform since June 1