Counting Vitalik Buterin, Roger Ver and Tom Morello in its ranks is no small task. And for good reason, the least I can say is that the Cryptograph project wants to put small dishes in the big ones. I explain all that!

A revolution is underway

The digital boom has led to the emergence of a new class of creators. Today millions of them make a living from their content, but remain dependent on centralized platforms, which question their system of distribution and arbitrary censorship.

Difficult to imagine a world, where the internet king, would not reshuffle the cards of artistic sovereignty. Digital assets promise to be as precious as a work of art, and the initiatives of Ubisoft and its cretinous rabbits, but also the craze caused by the CryptoKitties, reinforce this feeling.

The NFT ”Non Fungible Tokens” will allow new generations to appropriate these new digital assets. However, they will not be sufficient: the aspirations of new participants in the art market must push inventors to imagine innovative, fair and inclusive remuneration systems.

Could the Cryptograph project have found the key to this balance? One thing is certain, its system will be scrutinized with great interest by the artistic community.

A clever philanthropic and rewarding mix

Some imagine a diminishing future, others are working behind the scenes to bring about fairer income distribution mechanisms. The auction system called GBM (Gonnaud Bessire Mcdonaugh) was designed by the Cryptograph team to bring this new balance.

Set up on the Ethereum protocol, the Cryptograph token will be inaugurated by Vitalik Buterin who will put one of his creations on sale. Other names like Roger Ver, Tom Morello are mentioned and will actively participate in this new project. 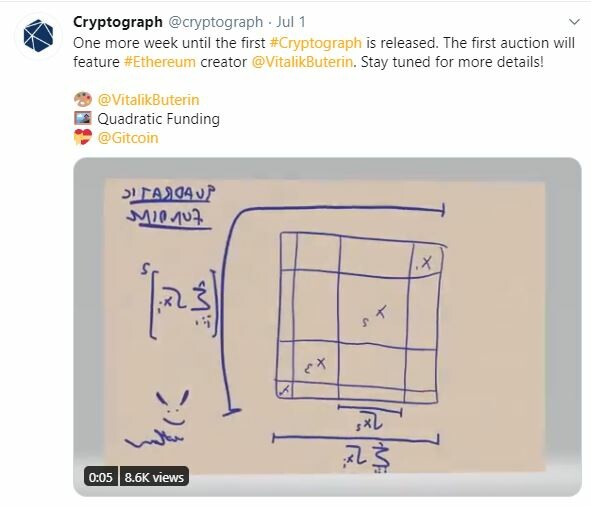 The validity of the auction system will therefore be scrutinized with the greatest attention, and for good reason, it promises to change the situation. Indeed, the artists who will market their work will have to donate a percentage to a charity of their choice.

The ingenuity of the system does not rest in the simple fact of contenting a charity, but also of remunerating the participants in auction games. They will in fact be financially rewarded each time their offer to bid is outbid. The notion of perpetual altruism is at the heart of this new mechanism, and promises the emergence of a new distribution.

Often mistakenly considered a traditional and dusty universe, art is also experiencing its digital revolution, carried by a Blockchain technology which seems to fit it like a glove. It is however difficult to find the formula which balances utility and interest for the participants. Has Cryptograph found the recipe?

You are Welcomed to Follow my new Space about Crypto and Blockchain. It is a well organized and rich space:
Follow this link: https://www.quora.com/q/cryptoplanet360

Davos, CBDCs, and the Rise of Bitcoin Art – CoinDesk

These Online Stores Are Bitcoin Only – Bitcoin News