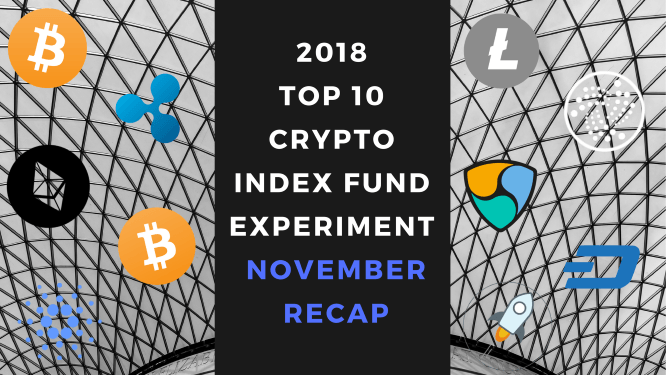 See the full blog post with all the tables here.

And learn about the history and the rules of the Experiments here.

This article contains affiliate links. If you click on a link in this article, I may earn a small commission at no extra cost to you.

For crypto storage, my recommended hardware wallet is the Ledger Nano X.

On solid financial footing and ready to purchase crypto? My recommended exchange is Binance.

Get up to $59 of FREE COMP with Coinbase Earn

AND Get up to $50 of FREE XLM with Coinbase Earn

Considering getting into cryptocurrencies?
Be prepared for a wild ride.
In fact, I recommend getting your financial house in order first.

Whew, quite a month for crypto.  After a modest October, the cryptocurrency market took off in November, and took off bigly. Although Bitcoin received much of the press, BTC was outperformed by most of its 2018 Top Ten Portfolio peers this month.

Taking a look at the 2018 Experiment as a whole, after 35 months, Bitcoin remains the only crypto in the green.  It is now +48% since January 1st, 2018 and is returning more than the S&P 500 over the same time period (much more on that below). Ethereum is coming up fast to the break even point as well, now down only -16% since the beginning of the experiment.

Question of the month:

Which crypto was ahead after the first year of the 2018 Top Ten Cryptocurrency Index Fund Experiment?

Scroll down for the answer.

Ranking and November Winners and Losers 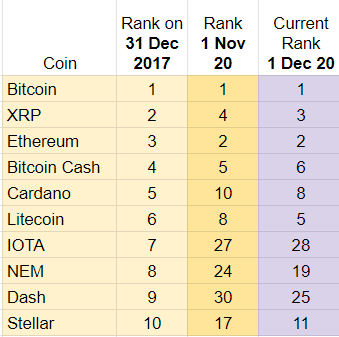 Lots of movement in November: except for BTC  and ETH, everyone changed rank.  And mostly positive changes for this group of older coins:  besides one place slips from both IOTA  and Bitcoin Cash, the rest of the movement was upward and solidly so.

XRP, ADA, LTC, NEM, Dash, and Stellar all advanced in the rankings. The highest climbers this month?  Stellar climbed an impressive six spots from #17 to #11 and is once again knocking on the door of the Top Ten. With little media attention Dash quietly had a great month, also gaining five spots from #30 to #25.  And NEM gained five places and regained a spot in the Top Twenty moving from #24 to #19.

PSA for the two other NEM hodlers who might be out there somewhere in the universe: there’s a NEM Airdrop coming, which may have something to do with recent positive price action and rank movement. XEM holders will get 1:1 Symbol (XYM) in January 2021.

Back to our regularly scheduled program…

Drop outs: After thirty-five months of this experiment 40% of the cryptos that started 2018 in the Top Ten have dropped out.  NEM, Dash, IOTA, and Stellar have been replaced by Binance Coin, Tether, LINK, and most recently, DOT.

November  Winners – XRP easily outperformed its 2018 Top Ten peers, finishing the month +175% and wrestling the #3 position away from Tether.

The closest it got to November 2020’s outsized gains was when it finished +65% in September of 2018, over two years ago.

Stellar was on fire as well, up +156% and nearly breaking back into the Top Ten.

November Losers –  BCH was up +18% for the month, making it the worst performing crypto of the group by far.  A bit of a tough luck loss for Bitcoin Cash, but it simply couldn’t keep up with the rest of the field.  Second worst performing was IOTA (+39%) followed by Bitcoin at +43%

For the overly competitive nerds, below is a tally of the winners of the first 35 months of the 2018 Top Ten Crypto Index Fund Experiment. Bitcoin still has the most monthly wins (9) and Cardano in second place with 6 monthly wins. NEM has lost 8 months, the most out of this group.

Every crypto has at least one monthly win and Bitcoin is unique as the only cryptocurrency that hasn’t lost a month yet since January 2018. 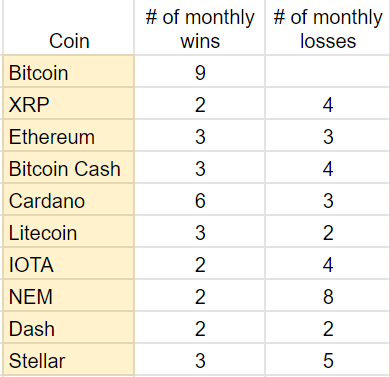 It’s taken nearly three years, but it’s happened: for the first time since the Top Ten Experiment began, I can report that putting $100 into Bitcoin on January 1st, 2018 has returned more than the US stock market as measured by the S&P 500.  After finally breaking even in October (BTC ended October +4%, the first time it finished in positive territory), it significantly increased its gains in November, ending the +48%.  While this monthly performance failed to keep up with the rest of the 2018 Top Ten in November, it was more than enough to surpass the gains of the S&P, which is up +35% over the same time period.

ETH is still a distant second place, but made significant gains in November and is within striking distance of the break even point, now down only -16% since January 2018.

The 2018 Top Ten portfolio as a whole?  Down -56%.  If you’re just finding these posts now, that sounds horrible, but actually represents the highest point since May 2018.  More details and a summary table below.

Thanks to a strong month, Dash has narrowly escaped the bottom, replaced by IOTA which has lost -90%. The initial $100 invested in IOTA 35 months ago is worth $9.74 today. 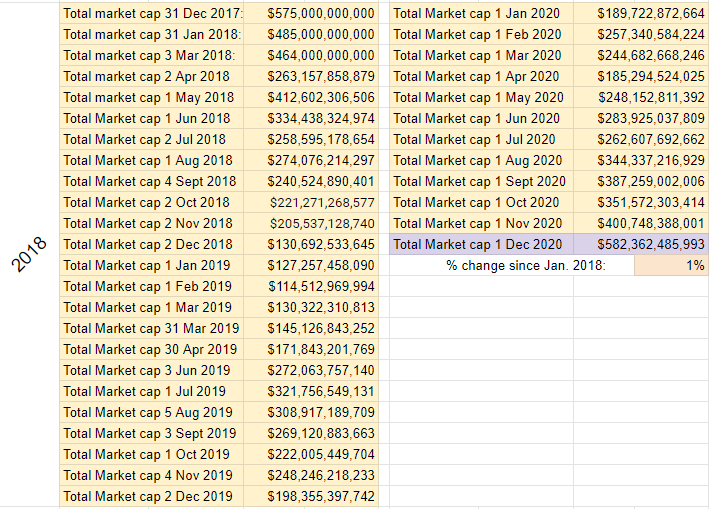 Another first for the 2018 Top Ten portfolio: after gaining a massive $182B in November, the overall crypto market is now at a higher level than when the Experiment started nearly three years ago. It’s only up +1% but definitely a milestone.  It’s been a tough road back though: you get a pretty good sense of the journey by looking at the table above. 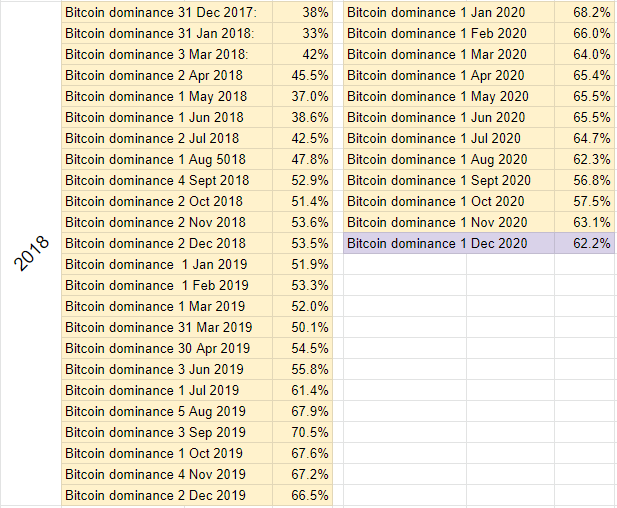 After a big leap last month, BitDom fell about one percentage point in November, signaling altcoin gains.  For context, BitDom was 68% earlier in the year and since the beginning of the experiment, the range of Bitcoin dominance has been quite wide: we saw a high of 70% BitDom in September 2019 and a low of 33% BitDom in February 2018.

The 2018 Top Ten Portfolio gained about $171 bucks in November and is getting tantalizingly close to the halfway back point.  If I cashed out today, the $1000 initial investment would return about $435, down -56% from January 2018.

For newcomers, welcome.  Also, yes, being down -56% on crypto in nearly three years sounds bad (and it is), but for some perspective it might be helpful to take a look at the ROI over the life of the experiment, month by month:

That’s up about +72% for the three combined portfolios, compared to +18% just last month.

Not a bad month for the Top Ten Crypto Index Fund Experiments!

Here’s a table to help visualize: 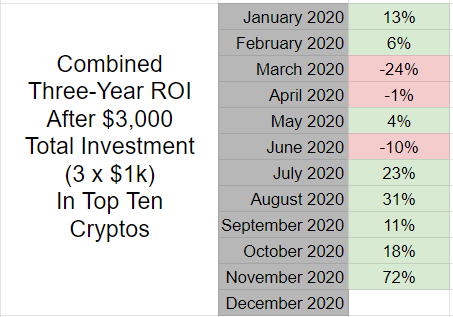 That’s a +72% gain by investing $1k on whichever cryptos happened to be in the Top Ten on January 1st for three straight years.

But surely I would have done even better if I went all in on one crypto, right?

Let’s take a look.  Only five cryptos have begun each of the last three years in the Top Ten: BTC, ETH, XRP, BCH, and LTC. Which one wins?

At this point in the Experiment, each individual crypto has outperformed the +72% gains of the Top Ten Index Fund approach except BCH which is only up +19%.

I’m also tracking the S&P 500 as part of the experiment to have a comparison point with other popular investments options. Despite all the chaos of the US elections, the S&P 500 Index rallied significantly and set a new all time high this month: it ended November up +35% since January 2018. 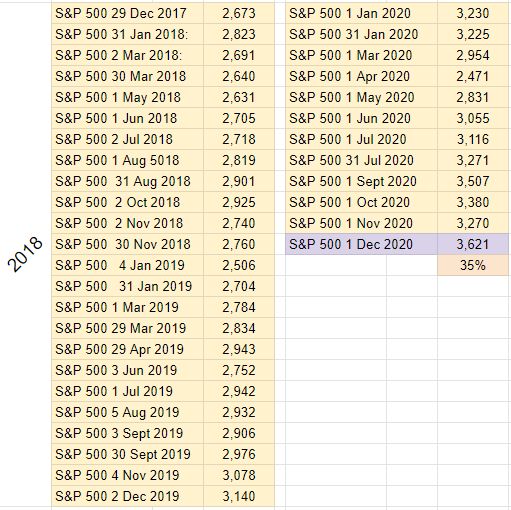 The initial $1k investment into crypto on January 1st, 2018 would have been worth about $1350 had it been redirected to the S&P.

But what if I took the same invest-$1,000-on-January-1st-of-each-year approach with the S&P 500 that I’ve been documenting through the Top Ten Crypto Experiments? Here are the numbers:

That is up +30% since January 2018 compared to a +72% gain of the combined Top Ten Crypto Experiment Portfolios.

You can compare against five individual coins  (BTC, ETH, XRP, BCH, and LTC) by using the table above if you want.  The key takeaway? The S&P 500 is currently underperforming the 2018 Top Ten Portfolio each of the cryptos in the Three Year Club except for Bitcoin Cash.

Here’s a table summarizing the three year ROI comparison between crypto and S&P as per the rules of the Top Ten Experiments:

But crypto has held the momentum in the second half of the year and has opened up the largest gap of the Experiment so far: an impressive +42% difference in November, even as stocks saw all time highs.

Despite US election confusion and an explosion of new COVID cases in November, both traditional and crypto markets had a strong month.  Bitcoin received the most attention, but alts did very well too, even some of the more established cryptos that make up the 2018 Top Ten portfolio.  One more month to go in 2020.  Are we in for a bit of a correction or can crypto climb higher before year’s end?  Stay tuned.

Thanks for reading and for supporting the experiment. I hope you’ve found it helpful. I continue to be committed to seeing this process through and reporting along the way. Feel free to reach out with any questions and stay tuned for progress reports. Keep an eye out for my parallel projects where I repeat the experiment twice, purchasing another $1000 ($100 each) of two new sets of Top Ten cryptos as of January 1st, 2019 then again on January 1st, 2020.

And the Answer is…

Help keep the lights on at the Top Ten Crypto Index Fund Experiments.

Bitcoin has a Healthy Pullback

Will the bubble explode ?