When “Square” company came and bought 50 million dollars worth of Bitcoin, it opened many forecasts and analyzes that it was a first step for a flood of institutions and companies to buy bitcoin and consider it as a reserve investment asset along with investments from other assets.

Before Square’s investment, it was Microstrategy, which bought $ 425 million in the past two months, making Bitcoin one of its primary reserve assets to hedge against monetary inflation.

Bitcointreasuries.org has published a list containing the names of companies that are publicly holding Bitcoin. 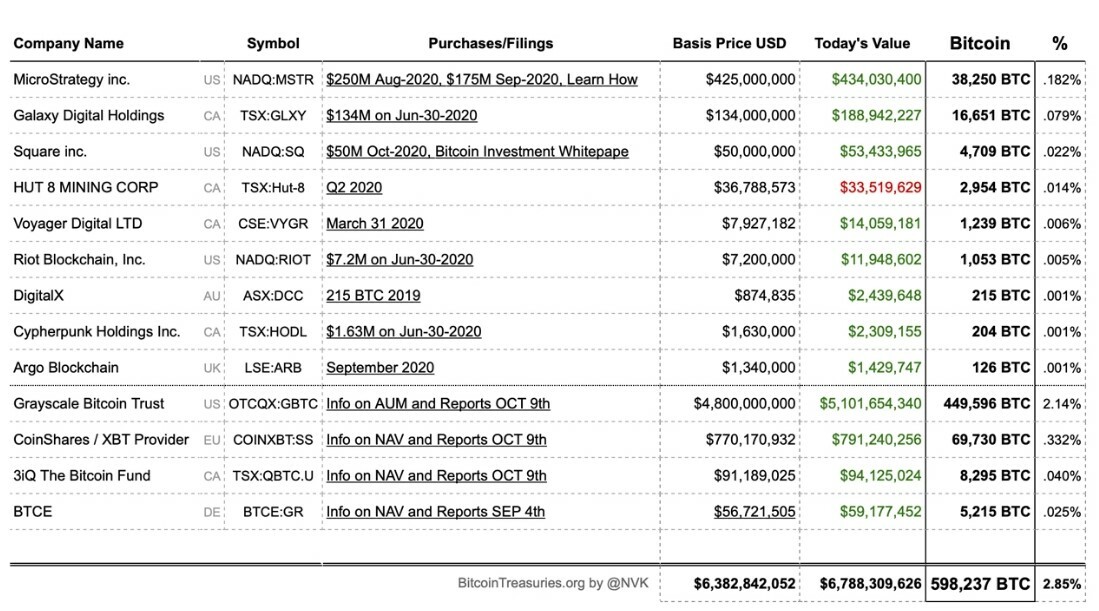 Grayscale is one of the most popular institutional investment funds in the crypto arena.

By providing the Bitcoin Trust Fund (GBTC), which owns and tracks the price of bitcoin, the New York-based company owns 449,596 bitcoins, worth $ 5.1 billion at present, and represents 2.14% of the total circulating supply of digital currencies.

The Trust acquired 70% of all newly mined bitcoins in 2020, doubling its investment portfolio.

It is worth noting that the “Gbtc” Fund holds Bitcoin on behalf of approved investment companies.

Grayscale’s Bitcoin Fund became the first publicly traded securities to invest only in the price of bitcoin and derive its value from it.

Grayscale may be a leading fund provider, but Microstrategy has grabbed all the headlines in recent weeks.

The Nasdaq-listed company bought $ 425 million worth of Bitcoin in August and September, making Bitcoin one of the main reserve assets of “Microstrategy”.

The multi-billion dollar US company now has a total of 38,250 bitcoins, in a move that signals companies’ increased adoption of bitcoin.

At current exchange rates, Microstrategy’s Bitcoin portfolio is worth more than $ 433 million, meaning it added an $ 8 million gain.

The company’s appetite for bitcoin comes on the back of increased stimulus spending, which led to the deterioration of global fiat currencies.

This investment reflects our belief in Bitcoin, as the most widespread cryptocurrency in the world, as Bitcoin is a reliable store of value and an attractive investment asset with the possibility of appreciating long-term value more and better than holding cash.

It is still too early to say that companies adopt the Bitcoin currency, but the adoption of Bitcoin by many large international companies would arouse the enthusiasm of the remaining companies that have not yet taken this step.

Recently, we published on the Arab Bitcoin website that the Square company had converted 1% of the value of its assets into Bitcoin.

Where the “Square” company bought about 4709 Bitcoin, or 50 million dollars.

Bitcoin is likely to become a more popular currency in the future.

With a capital of over $ 83 billion, Square provides software and hardware payment solutions.

This company has offices in the United States, Canada, Australia, Japan and the United Kingdom.

Win Up To 12BTC In TRedump Vs BidGreen Battle At Bc.game.

👉 10% Of The Entire Bitcoin Supply Is Held By 5 Exchanges

CryptoTab is Awesome! A Must Have For Crypto Collectors. Over $50.00 Withdrawn Already!

19 Oct: Brace for a Bombshell