A veritable monument to Internet culture and memes, a Tokenized version of the famous Nyan Cat has just sold for 300 ETH, or 580,000 dollars. Its creator believes that it has just opened the doors to the future of the meme economy.

Spectacular sales of non-fungible tokens (NFTs) have become commonplace. These digital works are enjoying unprecedented success and some are selling for huge sums of money. This is notably the case for a tokenised version of the very famous Nyan Cat, this cat animation made famous following its release on YouTube on 6 April 2011.

On the occasion of the 10th anniversary of the Nyan Cat, its creator Chris Torres has decided to auction a unique NFT featuring the GIF. The auction, held in the new Foundation marketplace, was open for 24 hours, with a starting price of 3 ETH.

Less than 30 minutes before the end ofthe auction, the bidding skyrocketed to an impressive 300 ETH, the equivalent of $580,000 at the event. Ten years after creating one of the most iconic memes on the Internet, artist Chris Torres could not believe he had made such a sale 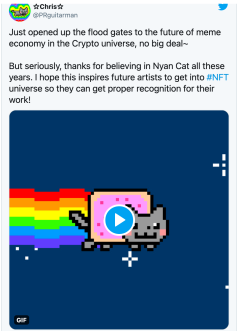 Towards a new meme economy?
Launched at the beginning of February, the new Foundation platform has already met with great success. The NFT market has surpassed one million dollars in volume just 2 weeks after its creation.

How to explain such a success? The way Foundation works differs from other platforms. Here, artists set a reference price for their works which, once reached, triggers an auction for a minimum of 24 hours. If a bid is placed within the last 15 minutes, the sale is extended by a further 15 minutes.