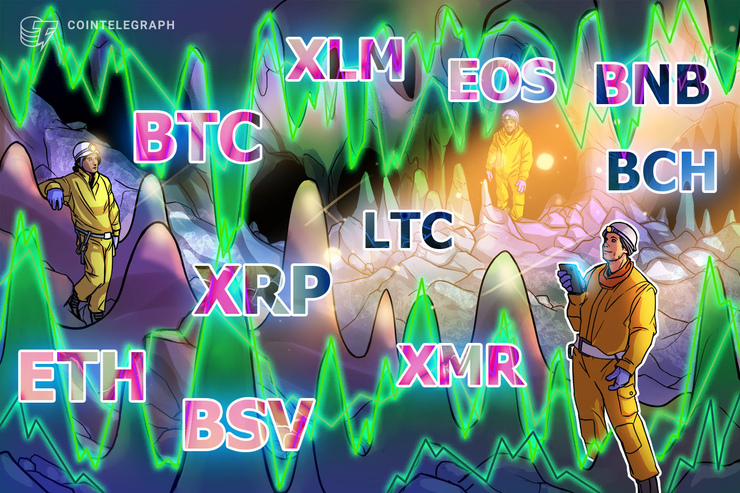 The views and opinions expressed here are solely those of the author and do not necessarily reflect the views of Cointelegraph. Every investment and trading move involves risk. You should conduct your own research when making a decision.

Market data is provided by the HitBTC exchange.

The global amount of debt with negative yields ballooned up to $15 trillion, according to Deutsche Bank. Though yields in the United States are still in the green, President Donald Trump has been pressing the Fed to cut rates aggressively. If the US also joins the negative yield bandwagon, cryptocurrencies are likely to surge.

Coinbase CEO Brian Armstrong said that institutional investors are taking a great interest in cryptocurrencies. According to him, $200–$400 million in crypto deposits are made every week. This is only a very small portion of the institutional money, but if global geopolitical issues and currency wars escalate, we expect a greater inflow down the line.

Fundstrat Global Advisors’ Tom Lee believes that Bitcoin (BTC) “is just resting,” and potentially could make a dash toward new highs by the end of 2019. Bitcoin’s uncorrelated nature to equities and bonds nature makes it an attractive bet for anyone who wants to hedge their portfolio. So, should traders buy the current dip or will prices fall further? Let’s analyze the charts.

Bitcoin (BTC) bounced back from $9,517.57 on Aug. 15, which is a positive sign. It shows that bulls are keen to buy on dips closer to strong support. While aggressive bulls might have purchased the first dip, it would be interesting to see whether the rebound withstands or fizzles out.

If the BTC/USD pair does not scale above both moving averages within the next couple of days, we might see another dip to $9,080. Repeated dips to a support level weaken it. If this level cracks, the next level to watch on the downside is $7,451.63. Such a move will dampen sentiment and might delay the next leg of the upward movement.

However, if the next dip to $9,080 will be aggressively bought, we might suggest long positions once again because it will offer a low-risk buying opportunity. The first target on the upside is $12,000, above which a retest of the yearly high is likely to happen, but if bulls fail to scale above $12,000, the cryptocurrency might remain range-bound for a few days. Both moving averages are flat and RSI is just below 50, which suggests a balance between buyers and sellers. Hence, we are currently neutral on the pair.

Ether (ETH) broke below the critical support of $192.945 on Aug. 14. This is a bearish sign because it opens the door for a fall to the next support at $164. Both moving averages have turned down, and RSI is close to oversold levels, which suggests that bears are in command.

Currently, bulls are attempting to propel the ETH/USD pair back above $192.945. An attempt to recover will face resistance at 20-day EMA and later at 50-day SMA. If both of these resistances are crossed, the pair can move up to $320.84. We will watch the price action for the next few days and recommend a long position if we find that buyers are back in action.

XRP plummeted below the critical support of $0.27795 on Aug. 14 and fell to a new yearly low of $0.225 on Aug. 15, which is a bearish sign. This shows that bulls anticipate even lower levels in the future, hence, they are not buying aggressively.

Both moving averages are trending down, and RSI is in oversold territory, which shows that bears are firmly in command. However, after breaking down a major level, we usually see a pullback rally. If bulls can quickly push the price back above $0.27795, it will indicate that the current breakdown was a bear trap and it might offer a buying opportunity. Nonetheless, if the XRP/USD pair turns down from $0.27795, it is likely to resume its downward movement toward its target objective of $0.19.

The failure to break out of $345.8 on Aug. 14 attracted sellers, and Bitcoin Cash (BCH) fell to the neckline of the head and shoulders (H&S) pattern, triggering out suggested stop loss. Though bulls defended the neckline, failure to push the price above 20-day EMA might attract another round of selling. The next drop to the neckline is likely to break it.

If the BCH/USD pair breaks down and closes (UTC time) below the neckline, it will complete the H&S pattern. Though the target objective of this bearish pattern is much lower, we expect some buying close to $166.98. Contrary to our assumption, if the pair breaks out of $360, it is likely to move up to $428.54 and above it — to $500. We would wait for the cryptocurrency to sustain itself above $360 before recommending the long positions again.

Both moving averages are trending down, and RSI is close to oversold territory, which shows that the path of least resistance is to the downside. On a drop below $69.9227, the LTC/USD pair can slide to $58.

Our bearish view will be negated if the pair reverses direction from current levels and breaks out of 20-day EMA. That will be the first sign that levels have become attractive for buyers again.

Binance Coin (BNB) has entered into a consolidation in an uptrend. Though it is below both moving averages, the bears could not break it below the minor support of $26.202, which is a positive sign. This shows that investors are not dumping their positions yet.

EOS is consolidating in a downtrend. The bulls purchased the dip to the critical support of $3.3 on Aug. 15, which is a positive sign. However, unless the price quickly bounces above 20-day EMA, we anticipate bears to make another attempt to break below the support. The downsloping moving averages and RSI close to oversold zone show that bears are in the driver’s seat. If the support at $3.3 cracks, the downtrend can extend to $2.2.

Contrary to our assumption, if bulls defend the support at $3.3, the EOS/USD pair might move up to 20-day EMA and above it to the top of the range at $4.8719. We will turn positive if the price breaks out and sustains above $4.8719 as it will indicate the start of a new uptrend. Until then, we remain neutral on the cryptocurrency.

Monero (XMR) broke below the ascending channel and plunged close to the next support of $72 on Aug. 15, thus triggering our recommended stop loss of $77.  The previous support line of the channel is now likely to act as a resistance.

If bulls fail to re-enter the channel within the next couple of days, the XMR/USD pair will again decline to $72. If this support breaks, the next level to watch on the downside is $60. Both moving averages have started to slope down and RSI has also dipped into the negative zone, which suggests that bears have the upper hand.

Conversely, if support at $83 holds, the pair might remain range-bound for the next few days. On the upside, a breakout of the moving averages can carry the price to $98.2939. We will wait for a new buy setup to form before proposing a long position in it once again.

Stellar (XLM) has broken down from the critical support at $0.072545. Both moving averages are sloping down and RSI is in the oversold zone, which shows that bears are in command.

If the price sustains below $0.072545, the digital currency will start a new downtrend that can extend the slide to $0.05.

Our bearish view will be invalidated if the XLM/USD pair quickly turns around and climbs above $0.072545, which will indicate buying at lower levels. In a downtrend, though the price might look attractive, it is difficult to predict where the bottom will form. Usually, downtrends don’t end without panic selling. Therefore, we suggest traders wait for the decline to end before turning positive.

Market data is provided by the HitBTC exchange.