Please remember that this is not a financial advice, do your own research and trade wisely, set your stoploss using the average true range indicator, and don’t use high leverage because of the high risk caused.

Now it is clear more than ever that generally, XRP is in an uptrend for few days, achieving new highs for this year, and aiming to get even higher. At this exact moment, XRP is trading around 0.63$, after reaching a high of 0.78$ on Binance Exchange. Also take in mind the general trend of the whole cryptocurrency market, the hype around XRP on Crypto Twitter and all the rumours about XRP new partnerships and the possibility of implementing Ripple technology for worldwide bank transactions. But you have to identify that the transactions are already being made using the Ripple technology in several bank, and XRP is the cryptocurrency made by this institution.

In the chart shown below, we used 4hr timeframe, considering the beginning of the first impulsive wave after the bullish MACD crossover, to be able to identify the early beginning of this wave. So based on the mentioned, the first impulsive wave started around 0.31$ and culminated reaching 0.50$. The second wave is the correction wave, taking price back to 0.618 on Fib retracement, droping the price back to 0.43$. It is possible that right now we have finished the 3rd wave, reaching 2.618 on Fib retracement, the 4th wave is a correction droping the price back to 1.618 levels, around 0.62$. The 5th wave will be the last wave, giving the last intense push upward for XRP and based on the method shown, the target must be between 1-1.1$. 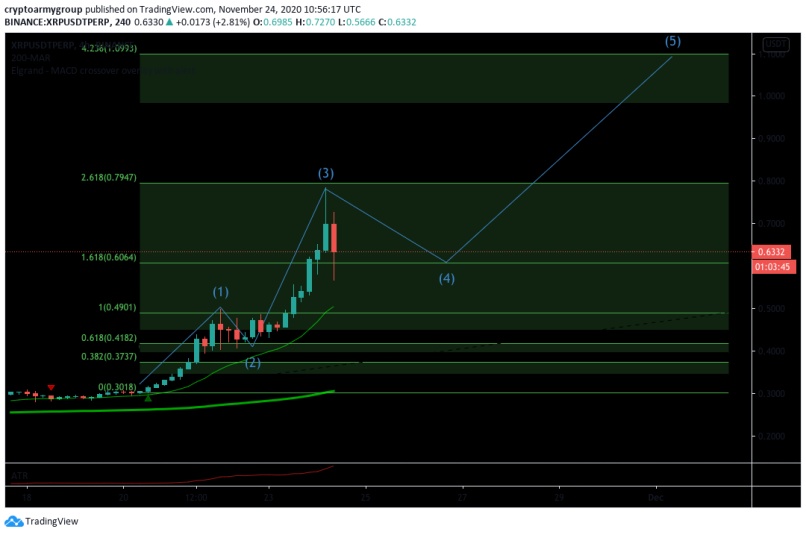 In the chart below, the support and resistance levels, are based on larger timeframe, using the Bitstamp XRPUSD chart. After analysing the chart, there is 4 important resistance lines and 2 support levels for this trend in general. 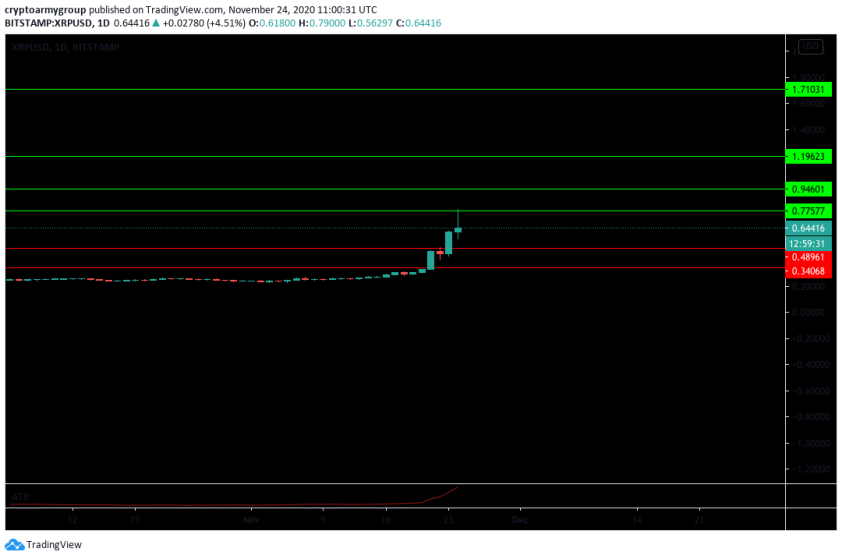 In these 2 chart you can identify the possible targets for XRP unless there is a trend reversal. Always remember that a trend is your friend until the end.

Thanks for your attention,