This article is not mine I just translated it into English but I find it so excellent …
source: https://cryptoactu.com/incroyable-bitcoin-hacker-twitter-est-un-ado/

Everyone has heard of this historic Twitter attack that rocked the social network in July of this year. An unprecedented Bitcoin hack, tricking celebrity account subscribers into paying BTC to double their stake. A technical feat that ended in a very meager booty in the end. Here is the reason …

Barack Obama, Bill Gates or even the Apple company asking its subscribers to pay a sum in BTC to see it double instantly… The pitch of this attack had nothing to envy the basic scams that pollute the networks as soon as it is question of cryptocurrencies. The real difference here is the target and the dissemination medium of this scam. A massive intrusion and hijacking of VIP accounts from the social network Twitter platform.

But despite the technical prowess the loot quickly turned out to be very small with just over $ 117,000 received on a BTC address. Which ultimately turned out to be good news given the exceptional scope of this cutting edge scam.

In any case, the problem was no longer there, when Twitter revealed that this intrusion had also been an opportunity to steal private data present on the accounts of the personalities concerned.

And it seems that this case of hijacking personalities’ Twitter accounts has just taken an unexpected turn. Indeed, three people have just been arrested as part of a joint investigation by all available police services, including the secret services. These are three individuals located in the territory of the United States and the United Kingdom. The brain of this operation was none other than a 17-year-old teenager. This brings the gang’s average age in shorts to 19. 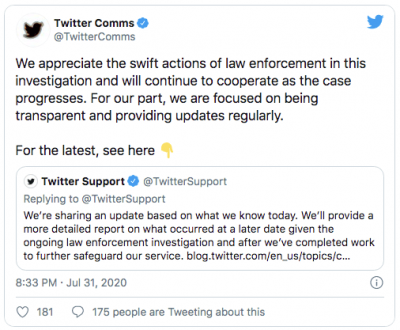 The information available makes it possible to understand how the two right (left) arms of hacker Kirk # 5270 – the mastermind of this case – got caught. And this concerns the Bitcoin earned during this Twitter attack. Indeed, it seems that the two little geniuses went to the Binance and Coinbase platforms in order to transfer some of the loot obtained there. This on personal accounts requiring a KYC which they had achieved using their (real) driver’s licenses.

The 17-year-old, the alleged mastermind of the case and suspected of being the hacker named Kirk # 5270 is at risk. Just like his two accomplices who could spend between 5 and 20 years behind bars.

10 years ago someone did a transfer of 184 Million Bitcoins — Shouldn’t there be only 21 Million of them?