PIVX is short for Private Instant Verified Transaction. This term is often used for cryptocurrencies that focus on fast and private transactions. In addition to incredibly fast transactions, this open source cryptocurrency also offers anonymity and security. After the currency was branched off from DASH (another open source cryptocurrency), PIVX was originally called Darknet. However, it got the new name PIVX in 2017. After this change, the PIVX community grew a lot and the team grew a lot stronger.

The history of PIVX

PIVX was first developed as a hard fork by Dash in January 2015 and was originally published as DarkNet (DNET). As a fork of the DASH coin, which also has its roots in data protection-oriented coins, DarkNet did not immediately attract the attention of cryptocurrency fans. In 2017, the currency DarkNet was renamed PIVX, which stands for Private, Instant, Verified, Transaction.
Initial struggles

protection is one of the most important rights of users. When DNET was first developed, the coin was not very popular. Only after the rebranding did people become interested in PIVX and began to invest time and money in the project. As a result of the rebranding, the PIVX community has grown exponentially and currently has over 9000 users. It should be mentioned that the users of PIVX are also called PIVians today.

The PIVX development team only includes people from the community. If you take a look at the PIVX website, you will find the main contributors to the project, but none of these people own the project. The financial aspect of the project is handled through DAOs. A DAO is a decentralized autonomous organization controlled by the project’s shareholders, not a central authority or government. The monthly budgets are set by the masternode voting system.

Why was PIVX created?

The coin was first developed to solve the privacy issues that some coins have. In most cases, users are actually able to find the cryptocurrency transaction on the blockchain. To change this, PIVX implemented the Zerocoin protocol that could solve this problem. Read more about this protocol in the following sections. 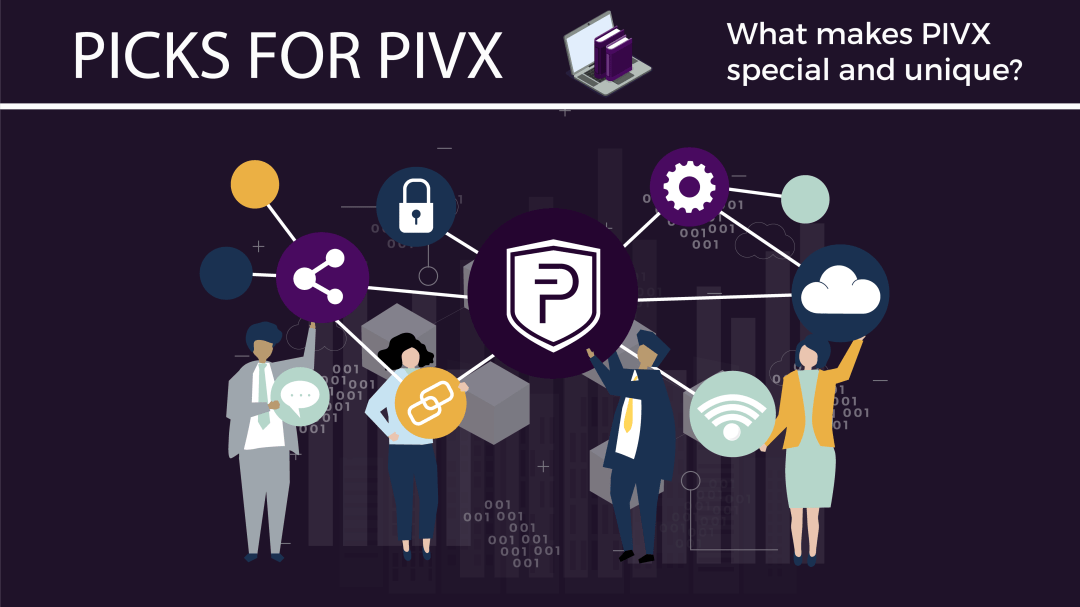 The PIVX community wanted to create an open source and decentralized cryptocurrency that could be shipped almost free of charge. The cryptocurrency is also completely private and leaves no trace of its users’ activities.

The team decentralized the coin by letting the community vote on their projects and implementing a proof of stake algorithm. The PoS algorithm enables participants to achieve a distributed consensus in which each new block builder is selected based on a random selection and factors such as age and wealth. As far as project coordination is concerned, only owners of a masternode can vote on budget and development proposals.

The advantages of the Proof of Stake algorithm

Another unique aspect of PIVX is the Zerocoin protocol, which converts a normal PIV to a zPIV. This protocol obscures the entire history of this coin and makes it impossible to tell from which address a particular coin came from. On the recipient side, this is only displayed as a normal incoming transaction with no history or background.

The team also added the SwiftTX feature as a way to confirm a transaction in seconds. Thanks to this function, the user does not have to wait for additional confirmations. This is a good start for PIVX to offer its own network as a payment provider for online shops, as there are no waiting times. All of this is possible thanks to the master nodes and the PoS 3.0 consensus.

PIVX encourages people to become their own bank, so to speak. With a PIVX wallet, users can send coins to anywhere in the world almost instantly and for free. The PIVX wallet also has a “normal account” function. This type of account contains your funds that you can use for regular public transactions. You can also opt for a “private savings account” that allows you to send your transactions privately.

In addition to absolute privacy and anonymity, the speed of the network plays a crucial role in PIVX’s mission. The speed of the transactions provided by this network opens up many new business opportunities. Thanks to the SwiftTX function, which enables an immediate transaction confirmation, online web shops can offer PIVX as a fast and reliable payment solution that could work for both sides. The implementation of PIVX in online shops would not only improve the user-friendliness and enable much faster transactions, but would also save the budget for both parties, since there are no additional fees.

Not just a cryptocurrency

PIVX is not only a cryptocurrency, but also a masternode coin. This means that users can use this currency to set up a masternode (a computer wallet) with 10,000 PIVX coins and thus earn PIVX every day. However, for this to be possible, you’ll need to use a special PIVX wallet, as the whole thing won’t work properly if you’re using an Exchange wallet.