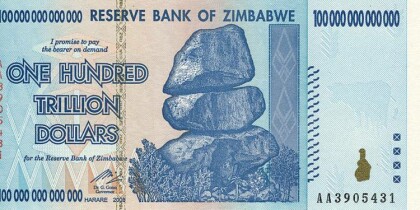 Zimbabwe is decidedly unable to emerge from the vortex of hyperinflation. Last event achieved on the Zimbabwean government ordered a halt to all payments by mobile phone. All of them? No, decentralized cryptos are out of reach.

750% inflation for the zimdollar, a sad repetition

Zimbabwe’s national currency, the Zimbabwean dollar or zimdollar , has unfortunately become a textbook illustration of what hyperinflation is . The problem with fiat currencies is that their value is based solely on trust in their issuing state.

When this confidence disappears , so there remains nothing , unlike the old currencies, which were backed by precious metals like gold and silver. So even if the issuing state were to collapse completely, it was still possible to recast the pieces!

At the height of its monetary crisis in July 2008, the Zimbabwean dollar experienced an inflation rate of 2.2 million percent . To the point that the country had to use foreign currencies, especially the US dollar , for 10 years , from 2009 to 2019!

But the new zimdollar, created in February 2019, is already experiencing a new hyperinflation crisis , around 750% for now.

It is in the context of this new monetary slippage that the government and the central bank of Zimbabwe have called for an immediate end to all transactions by mobile phone . 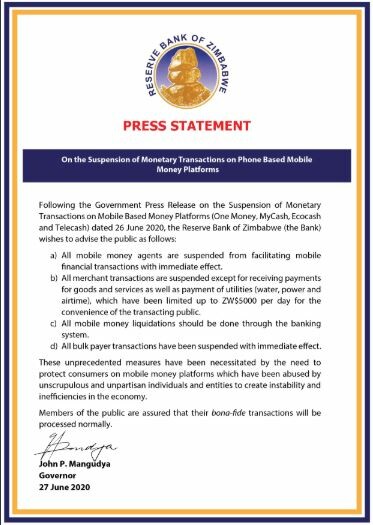 President Emmerson Mnangagwa has accused mobile payment platforms of ” conspiring to sabotage the Zimbabwean dollar and cause it to collapse, ” according to the Financial Times . At the same time, the National Stock Exchange, considered a possible accomplice, also received the order to stop its operations .

Four mobile platforms are targeted by the authorities: One Money , MyCash , Telecash , and above all Ecocash . The latter is the most used in the country.

“Ecocash, in particular, acts as the central pivot of the unbridled black market exchange rate, and thus feeds the incessant rises in the prices of goods and services, which undermines the economy and causes significant hardship for the people of Zimbabwe. » Government statement

The company Ecocash has so far not complied with this injunction, and has even called on its users not to panic and to continue using its platform normally.

Confidence is a fragile thing, and when it is broken, it is difficult to restore. Zimbabwe has bitter experience of this, and is struggling to impose its national currency. Especially since solutions considered more secure (digital payments / bitcoins) are now within reach of all mobile phone holders.

CEX.IO allows for the buying of bitcoin and other cryptocurrencies for low fees via credit card, Debit card. Customers can also purchase for free (no fees) with bank transfers. The best thing about Cex is that it supports fiat currencies like USD and EUR which means you can withdraw your money and deposit it directly to your bank account without the need of a third party. In conclusion, Cex allows you to trade Cryptos, deposit funds from your bank account and also withdraw your funds to your bank account, it is an All-in-one exchange.